About Mr Booger and his creator. 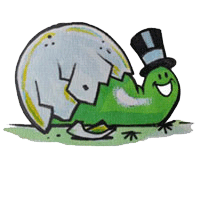 Mr Booger is created by Erwin Brunsveld. He always told it as a bedtime story for his kids.

Mr Booger was born in 1989. Erwin told Mr Booger adventures to his eldest son Eddy. Also Danny, his second son was raised with Mr Booger. When Erwins little girl was born in 2004 Mr Booger was reintroduced in the family. Mr Booger expierences al sorts of adventures that Rebecca often encountered incountered during the day. A fun way to go the day. Going to bed is always alittle party like this.

It took until 2010 for Erwin to first draw Mr Booger after his girlfriend Astrid asked him how Mr Booger actually looked. We got many enthousiastic responses to the drawings. Mr Booger makes you smile and happy. After a while the idea to make Mr Booger available for more kids became real.

Now there are 3 ebooks, a website, nice games and we are working hard for more nice things.

Do you want us to keep you updated? You can sign up to the newsletter.

We hope you enjoy this website and Mr Boogers stories. We love your feedback. Please drop us an email if you like.